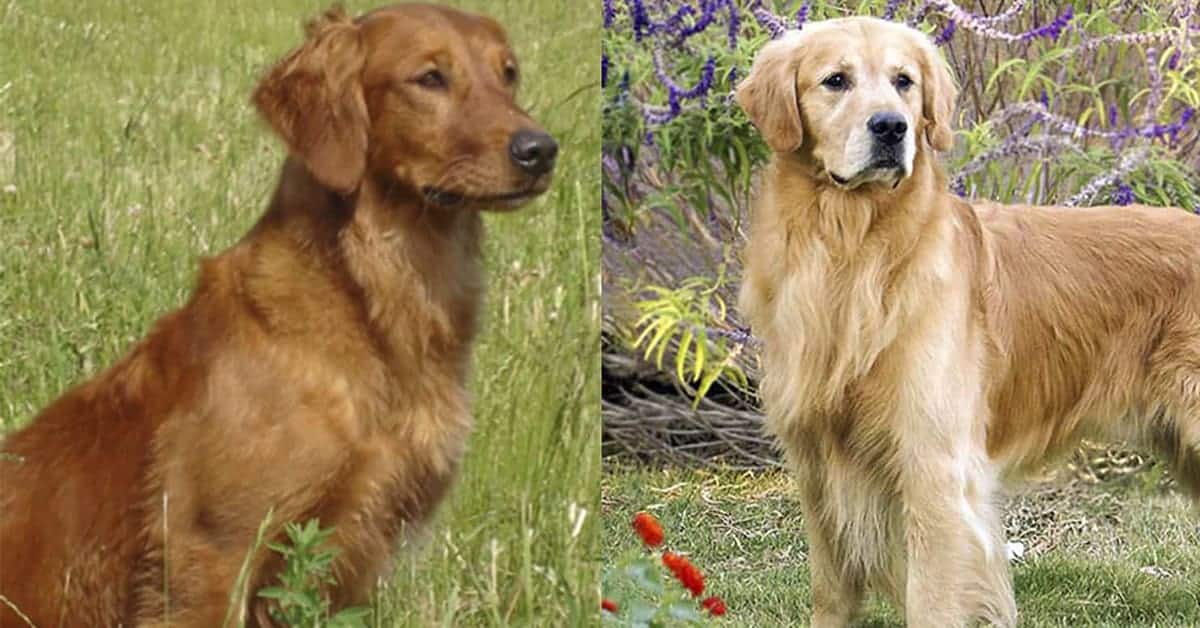 Yes, they’re both golden retrievers that make great family pets, but there are some differences (such as their size and personality) that you should consider if you’re looking to get a golden retriever.

In this post, I’m going to break down seven differences between these two styles of golden retrievers.

Before we get into the nitty-gritty of the differences between these two styles of goldens, let’s make a few things clear…

First, these are both golden retrievers, they’re just different styles of the same breed.

And because they’re the same breed, they’re more similar than they are different.

However, they are bred for different purposes, and those purposes influence all of the factors that we’ll discuss here.

And finally, these differences are generalities, not hard set rules.

Every dog is an individual and can be on any end of the spectrum for the factors we’re talking about here.

Now let’s talk about the differences between these two styles…

They’re meant to be in the field all day retrieving gunned down fowl.

They’re bred for a specific personality and drive.

Show golden retrievers are bred for a specific look.

They’re bred to look like what the judges at conformation events expect them to look like based on the breed standard.

They’re smaller and slimmer, and have body types that help them run, jump and swim all day.

Their heads are usually “wedge-shaped.”

They often tend to have heads that are more blocky.

Since field bred golden retrievers are bred to hunt, they typically have more driven personalities.

Like all golden retrievers, they’re loving and aim to please.

They’re typically friendlier and, like all golden retrievers, they too aim to please.

Both breeds are also usually good with other dogs.

Since field golden retrievers are bred to hunt all day, they have tons of energy.

Typically, they have more energy than show golden retrievers.

All golden retriever puppies, no matter which style, have tons of energy, and just because show golden retrievers typically have less energy than field bred goldens, they can still be quite the handful.

Because they have shorter coats, they have less volume of fur to shed, so it may feel like they shed less.

Since they have such full coats, they shed excessively, so get used to it being all over the house.

All golden retrievers, especially field goldens, are very smart, love to please people, and love treats and praise, so they naturally take well to training and enjoy it.

If you don’t train them, their brainpower will usually manifest itself in something mischevious, like chewing up shoes or stealing socks.

Field golden retrievers love training and they need lots of it.

Just like field goldens, show golden retrievers make great students because they are intelligent people-pleasers that love treats and praise.

However, they may need slightly less work than field goldens because they weren’t bred for such drive and the need for a job.

Are they good with families & children?

Field golden retrievers typically make great pets, however, they need lots of attention and can be mouthy (after all, they are bred to carry game in their mouths).

They can be a little on the rough and tumble side, but are very loving and devoted to their families.

Since show golden retrievers are typically a little calmer, need a little less training, and are a little more friendly, you could make a case that they make better family dogs.

However, both styles of goldens make great family pets.

They’re also good at sports such as agility and dock diving.

In addition to excelling in dog shows, show goldens, or dogs from show golden lines, are often therapy dogs or service dogs.

They’re both wonderful dogs and with the right training, can make great family pets.

Have any questions about field bred vs show golden retrievers?

Have you owned one of these styles?

And if you know someone who’s thinking about getting a golden retriever, please share this article with them!

P.S. If you liked this article, you’ll also like our Complete Guide To Golden Retrievers.

Jake (the human) and Oliver (thinks he's a human) are the two behind Golden Hearts. Jake believes that golden retrievers are the best dogs, and that you should always check your poop bags for holes. Oliver believes every day is the best day. Learn more about Jake & Oliver here.

Continue Reading
link to Are Golden Retrievers Good With Cats? (What Every Owner Should Know)

Although our culture has led us to believe that cats and dogs are sworn enemies, most dogs and cats actually get along quite well. In particular, according to the AKC, golden retrievers are one...

Jake (the human) and Oliver (thinks he's a human) are the two behind Golden Hearts. Jake believes that golden retrievers are the best dogs, and that you should always check your poop bags for holes. Oliver believes every day is the best day. Learn more about Golden Hearts here.