Can Golden Retrievers Be Aggressive? Here’s The Truth – Golden Hearts Skip to content 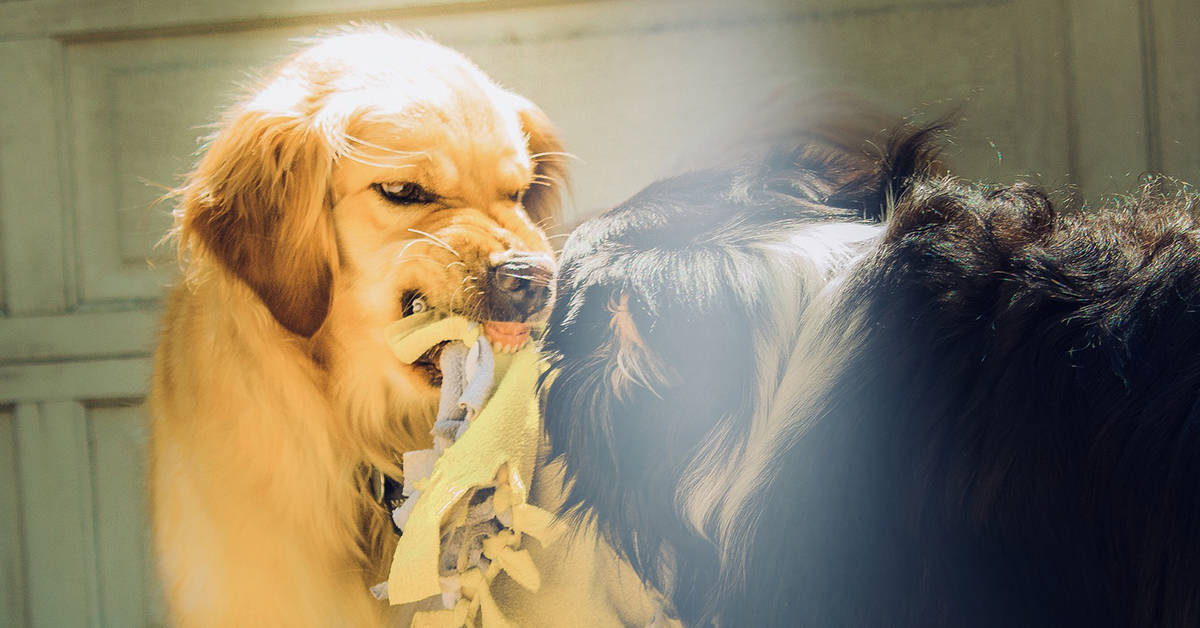 Want to know if golden retrievers can be aggressive?

The short answer is yes, they can be.

Any dog (or human, for that matter) can be aggressive…

But is it normal for golden retrievers to be aggressive?

In this article, you’ll learn:

Can Golden Retrievers Be Aggressive?

However, like all dogs, there is a possibility of them becoming aggressive.

In some cases, aggression can be fixed through training, while in other cases, different solutions may need to be employed (careful management, medicine, rehoming, etc.).

The good news is that most of the time aggression can be fixed.

Now let’s get into why this happens…

Why Do Golden Retrievers Become Aggressive?

There are lots of reasons why golden retrievers can become aggressive, but it’s normally a mix of genetic factors and environmental factors.

If a golden retriever is poorly socialized, they’ll often be scared or nervous in many situations.

If you were raised in a sheltered home with no experience of the outside world, you’d be scared, too!

If a dog has been physically or mentally abused, their reaction to some people in some situations might be to show aggressive behaviors.

This, too, is understandable.

If you had been beaten up often, you’d probably lash out as well!

Unfortunately there are many breeders out there who are just in it for the money.

They don’t care about their dogs’ pedigrees, which can be a problem if grandpa golden retriever was extremely aggressive.

Sometimes there may be a chemical imbalance in a dog’s brain that causes them to become aggressive.

It may be just in certain situations, or it may happen randomly.

They obviously don’t speak, but they do use their body language to tell us how they’re feeling.

According to Tufts Veterinary School, here are some signs that act as a warning that a dog is in an aggressive mood:

Most of the time, you’ll see a combination of these signals from an aggressive dog.

These are warning signs that can precede a bite, so be careful if your dog is showing these signs.

When Can Golden Retrievers Become Aggressive

There are several scenarios that can trigger a dog to become aggressive.

For some dogs it’s only a very particular situation, while for others, they may be aggressive in several scenarios.

According to the ASPCA, here are some potential triggers:

Food aggression in golden retrievers is one of the more common scenarios where goldens can become aggressive.

According to Tufts Veterinary School, food aggression is when dogs become aggressive when someone approaches them around food.

This can involve their regular kibble, or even a food-related toy, such as a rawhide chew or pig’s ear.

There are a range of fixes for this, including training a dog to stop showing this behavior, or just effectively managing it and minimizing the risks around it.

How To Prevent Aggression In Golden Retrievers

The best thing to do about aggression in golden retrievers is to stop it from happening in the first place.

Since bad behaviors usually stem from a mix of environmental and genetic factors, here are three ways to try to prevent aggression in your golden:

But if your dog is comfortable in many environments and around many types of people and animals, they likely won’t feel threatened as much as a dog that’s never experienced the world outside of their house.

Since genetics definitely play a role in whether or not golden retrievers can be aggressive, make sure to choose a good breeder than is breeding good-tempered dogs.

Also, breeders are the first ones to socialize your puppy, and responsible breeders will know how to do that, as well as care enough to do it.

Dogs often don’t understand what you’re trying to tell them when you punish them.

But what they definitely understand is that the punishment is coming from you, so they may learn to be fearful and aggressive towards you and or other people when they’ve been physically or verbally punished.

What To Do If Your Golden Retriever Is Aggressive

If you have an aggressive golden retriever, get professional help!

Goldens are big dogs with big teeth, so if you have an aggressive golden, it could be dangerous.

A professional can help identify what the risk of your dog’s aggressive behavior is, what’s the source of their aggression, and how to fix it.

Posting in Facebook groups (or even reading blogs like this) where you’re getting advice from someone who’s not a professional at dealing with a potentially dangerous problem is not a good idea, and could even make the problem worse.

Also, dogs can be aggressive for different reasons, so it’s important to get someone who knows your unique dog and your unique situation.

Although it is not common, it is possible for golden retrievers to be aggressive.

To prevent aggression in your dog, be sure to never physically punish them, choose a good breeder, and properly socialize them.

And if you already have a golden retriever that’s aggressive, get professional help!

They’ll be able to help figure out why it’s happening, as well as come up with a solution to fix it.

P.S. If you liked this article, you’ll love the Complete Guide To Golden Retrievers.

4 thoughts on “Can Golden Retrievers Be Aggressive? Here’s The Truth”